“Innovative agriculture for a sustainable development in Africa” that is the moto of Koffi N’guessan, a young and determined African from Cote d’ivoire.

Born in 1997 in Boni-kouassikro, in the central East of Ivory Coast, of a farmer father and a housewife, Nguessan Koffi Jacques Olivier is the founder of the company, The Yaletite Entreprise Group of Ivory Coast (TYEGRO-CI).
After passing his Baccalaureate, He got himself enrolled in a private university; INSTEEC Group in Abidjan for a professional Bachelor of Science in Business Management.
Given the success in his activities, and the restriction of his time to the benefit of the management of his company, with a  very busy schedule, he decided to put a hold on his studies to better serve in business.

Noticed by his young age and the innovation in his activities, he received in 2016, the prize of the best young African agricultural entrepreneur sponsored by the Louis Dreyfus Foundation and the price of the third best African entrepreneur sponsored by the Mastercard Foundation consecutively in South Africa during the annual gala of “The Anzisha Prize“.

In 2017, named one of the three best Ivorian entrepreneurs to represent Côte d ‘Ivoire at HUB – AFRICA in Casablanca. That same year, he received the award for the best young African business in Johannesburg and was nominated among the three most outstanding African entrepreneurs at the annual gathering of the African Leadership Network in Mauritius.

How did all this begin?

It all started with frustration and desire. Indeed, in secondary school, I was fired from school because I failed to do a homework assignment due to the fact that I could not photocopy a page (each student contributes for a copy of the assignment). Because the administration was unable to, for lack of financial means, then I asked myself the question of what I could do to have money.

Secondly, I always had the desire to fight for nature and give a second life to objects, so after some trainings  on the destruction of the forest and animals (from 16 million to 3 million in 2013) . I decided to find a solution to the problems confronted by mother nature. So after some  research I managed to turn pineapple leaves into leather to allow the animals to live, and in 2015, I managed to turn the skin of banana into charcoal to allow the trees to exist.

In addition, Cote d’ivoire, which is the world’s largest cocoa producer, does not yet have a 100% Ivorian chocolate industry, so I decided to invest myself into the transformation cocoa into chocolate, but this time in a natural way, without flour, or other chemicals that could poison it.

Finally, I found that we consume imported agricultural products whose origins, production condition, storage conditions, etc. are unknown, which mostly has a negative impact on our health. Therefore, I decided to start a 100% organic farming business, we cultivate in better hygienic conditions and market these products on the spot with a guarantee to consumers.

How do you manage your business?

I have a team of 48 permanent workers and a hundred under contract. We produce by order and nothing for the moment plays on the quality of our production. Our main products are agricultural products (63%) and then chocolate. The leather has just been confirmed with our first result and we will officially launch massive production and sale in the near future.
We grow and process agricultural products such as:
* cocoa chocolate,
* leather pineapple,
* the tomato into a biodegradable bag and
* banana in coal and fuel.

We grow and market:
*the cabbage,
* chilli,
*eggplant,
*the cucumber,
*the carrot,
okra,
*the manioc,
* corn and
* Onion

Nothing good comes so easily, we also have our shares of problems but we do not let go.
• lack of staff,
• lack of organization of the agricultural market in Côte d’Ivoire,
• insufficient delivery material,
• the incivility of most people who are content with quantity instead of quality,
• high level of poverty of the population and
• lack of financial support.

Was the Anzisha experience worth it?

Impossible to say how Anzisha (an initiative that supports and trains very young entrepreneurs (15 to 22 year olds)  discovered me, because I once received an email saying that I fully met their conditions and so I had to fill out a form, and I did.
As a result, we met in South Africa with 11 African countries represented and each was called upon to present his works. From there, I won the prize for the best young African agricultural entrepreneur sponsored by the Louis Dreyfuis Foundation and the third best African entrepreneur award sponsored by the Master Card Foundation consecutively, and it was the first time in the history of the organization that only one person wins two awards at the same time; I am the only one.
Since then, I have “bathed” in a large network of powerful businessmen around the world. 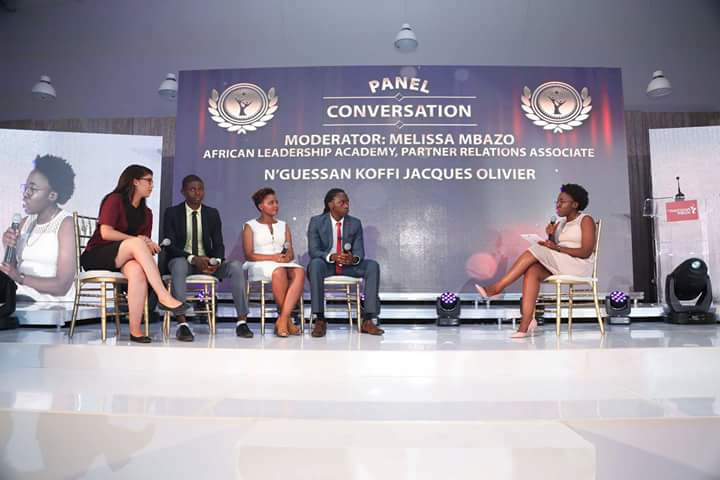 And when you are discouraged what do you do?

What motivates me to go forward is the fact that i need to contribute to the fight against poverty, malnutrition, unemployment and crime through agriculture because it no longer serves only to feed people, but to produce foreign currency, it is the basis of our culture, it is necessary so give him his place and his rank. Every farmer standing on his knees dominates. I like farmers!

Is the entrepreneurial path full of lessons or it’s all defined?

The lessons are never the same, it varies for each individual, but I learnt a lot of things so far and that is:
• that you often have to look in the rearview mirror while advancing,
• Then, it is better to be alone than to be badly accompanied
• For a project on which you will succeed, you will have more people to discourage you than to encourage you, but go to the end, do not listen to them, you must know how to listen to the voice of your heart and that of God.
• Seeking to multiply resources rather than being limited to first success
• Failures precede a very great success,
• Identify threats and denigration to make you strong

What is your most important advice to young Africans of today?

Do like me, “just start”, God has a plan for all, do not fear anything except the illegal. We have a generational challenge; creating jobs for those who do not have one yet.

Ladygracious.com It is an online media dedicated to showcase innovations and creativity in every sector in Africa, projects, businesses, initiatives that takes place in the African Industry with a touch of innovation.